The basin of an extinct volcano otherwise known as Edinburgh saw the second public outing of the “Agile: It’s not just about the development team” workshop run with Kevin Rutherford, this time at XP2016. The format was the same as the run at Agile Manchester 2015 but the time allowed was slightly longer so it would be interesting to see if this had an impact.

As in the Manchester run, teams were given a vignette describing a particular role in a company to see how a super-fast development team would impact them. The roles describe various people outside the development team – support manager, sales director, marketing director and finance director – and ask some questions to help get the team’s thoughts going.

Below are the outputs from the four teams (the support team had two posters – one with their raw data and one with a more refined model). 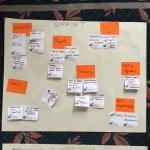 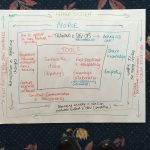 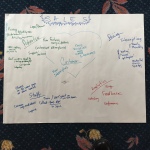 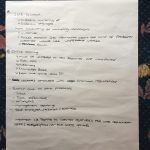 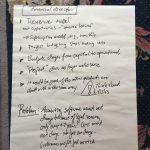 The first team up was the one exploring the impact on the finance director. They quickly spotted what seems to be an obvious opportunity to move to a subscription model rather than a one-off license sale (1). However, they also moved on to question the use of projects as change vehicles under this delivery model, particularly with respect to project budgets. The cost of the people (and resources) involved in the ongoing delivery of the product become operational costs (“the price of doing business”) rather than a series of one-offs but there were some concerns about whether this would impact some overall company tax or budgeting mechanisms which involve capitalizing a chunk of project work (2).

Although not strictly in the area of finance, the other concern from this group was around risk. Given the type of product (accounting software) they felt that a large percentage of the user base might be quite conservative and so react badly to continual updates – specifically accounting professionals – so they would look to batch up features into some form of periodic release to reduce potential customer concerns. This concern was shared by several other groups.

The team representing the marketing director decided that marketing campaigns would have to become more frequent and that the more frequent releases would give them the opportunity to gather more feedback from customers about the features being delivered. Without having to focus on a large feature backlog, mechanisms such as A/B testing could be implemented to gather this sort of information.

The support team identified that they would need to work more closely with the development team, sharing knowledge more rapidly and moving to more of a devops approach. As with the marketing team, they identified that training would have to be updated more frequently and that training would probably change in format to be more on-demand and built-in. The role of support would also change, becoming more proactive rather than reactive and being able to take on more data analysis as the amount of data gathered on system usage increased.

Finally, the sales team saw the improved development capability as a route to better quality and an approach of “no bugs pending” could be advertised as a way to differentiate the product offering. Faster development could also allow them to add features to support different sales models such as multiple levels of product (entry, home and enterprise) and different types of subscriptions (monthly, yearly). The need to work more closely with development and support was acknowledged with teams sharing common information radiators and data from the system.

The list above is just a subset of the overall thoughts and ideas captured by the teams. Take a look at the pictures of the team posters to see what else was thought of.

This is now the 4th time this workshop has been run – two public runs and two in-house runs. There are definitely consistent patterns that seem to emerge every time such as the need for the different teams to communicate more tightly, to collaborate a lot more, and the potential blurring of roles/siloes. The shortening of the delivery cycle encourages compression of the surrounding cycles such as sales and marketing. An interesting new theme that has started to come out is that it might be difficult for this new product to live within the existing organization and that this poses challenges on several levels.

We would like to thank all those who took part in the workshop for their ideas, energy and willingness to step outside their comfort zones.

One thought on “XP2016 – Agile: It’s not just about the development team – reloaded”